How much history behind the simple flies of the North Country. Between silks, moorhens and Skues, a fundamental text in the library of every passionate fly angler.

Edmonds' and Lee's Brook and River Trouting of 1916 is more or less the last word on North Country flies from its era. Although the book’s catalogue of flies is shorter than either Thomas Evan Pritt's or Francis Maximilian Walbran’s, it includes three dozen meticulously researched North Country patterns, split fairly evenly between game hackles and winged dressings, together with about as much instruction about selecting hackles as you could care to read on a sleepless night. There are a few favourites missing here and there, but not many, and if you don’t own a copy, then you should. However, it is worth understanding the personalities behind the book, because while the work belongs to the North Country tradition, at the same time it stands slightly apart from it. 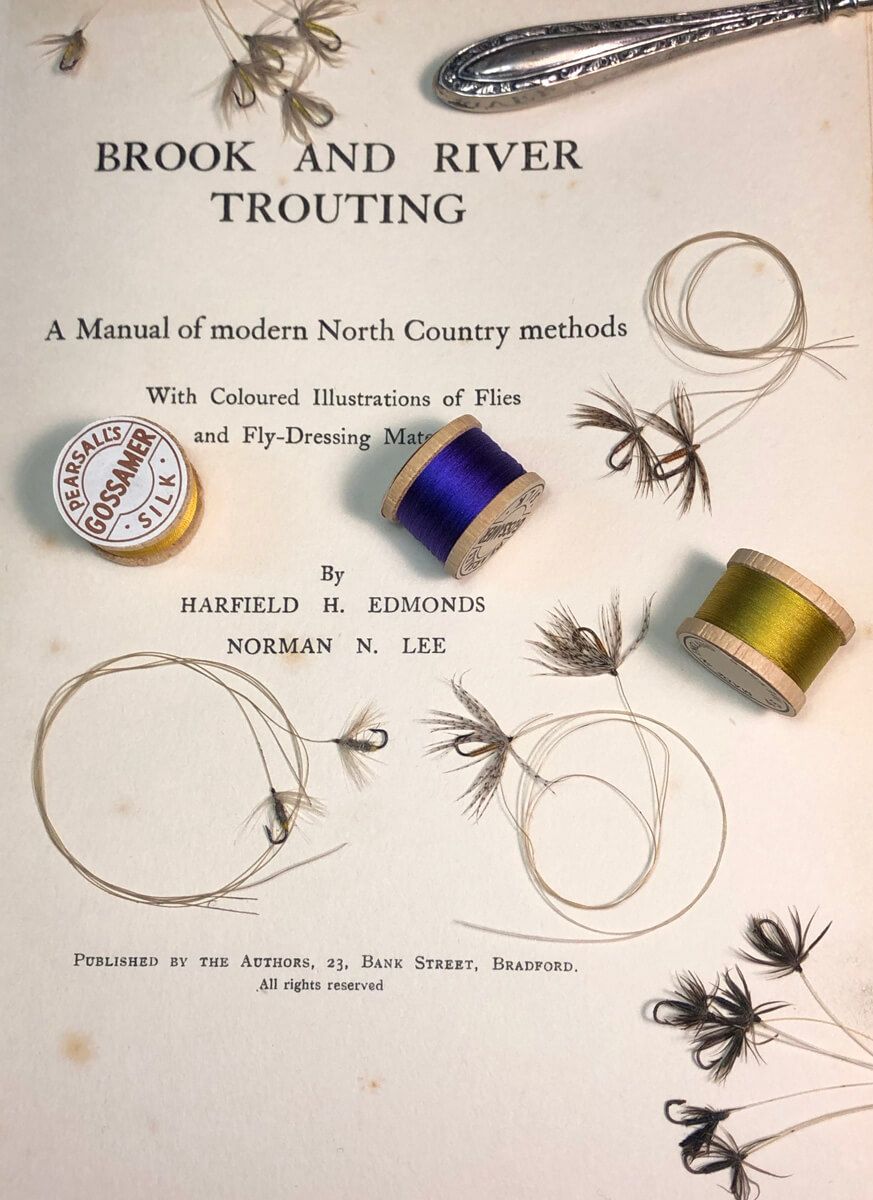 Harfield Henry Edmonds was born on December 5th 1882 at Manningham, Bradford, and for some unexplained reason was brought up by his grandparents, being educated at Salt’s Grammar School, Shipley, where he made friends with Norman Lee. Edmonds was taught to tie flies by a signalman on the railway, became a keen entomologist, and collected naturals from rivers so that he could compare their colours with the feathers he used. To cut a very long story short, by the early 1920s he was the governing director of Thomas Edmonds and Sons (Textiles) Ltd., and he served on local councils, the committees of various fishing clubs, fishery boards, and even as vice president of the Salmon and Trout Association in 1952-53. He died at his daughter’s home in Northallerton on September 30th 1956, having earned his place in the North Country pantheon. 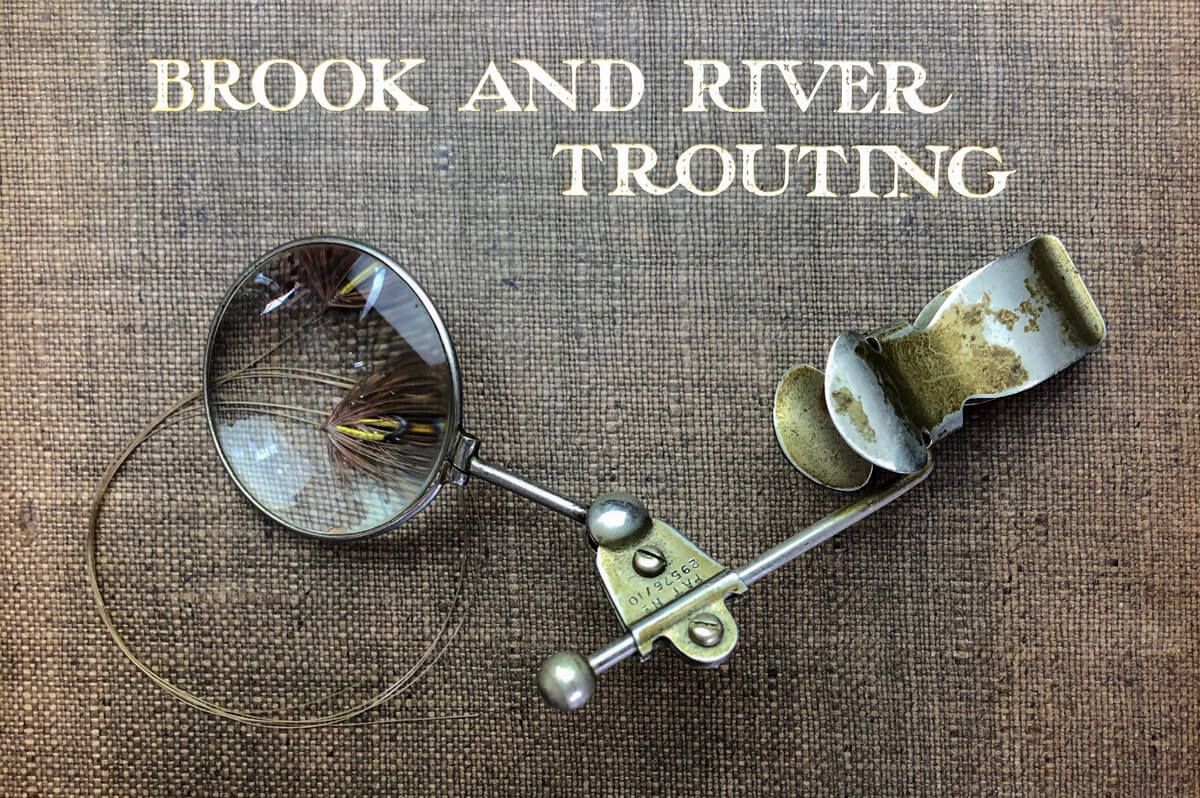 Norman Nellist Lee, he really did have a ‘t’ in his middle name, was born on June 24th 1881 at Heaton, Bradford, the son of John Lee and Mary Jane Nellist. His father was the company secretary and accountant of a company of silk spinners and manufacturers. The two giants were Lister and Salt, and if John was employed by Lister, then Norman was educated at Salt’s Grammar School, where he met Edmonds, before going on become the senior partner in the law firm of Norman Lee, Armistead and Roberts in Bradford. Lee died at Stonelands on 27th June 1951, three days after his 70th birthday, and is buried in St. Oswald’s graveyard at Arncliffe. 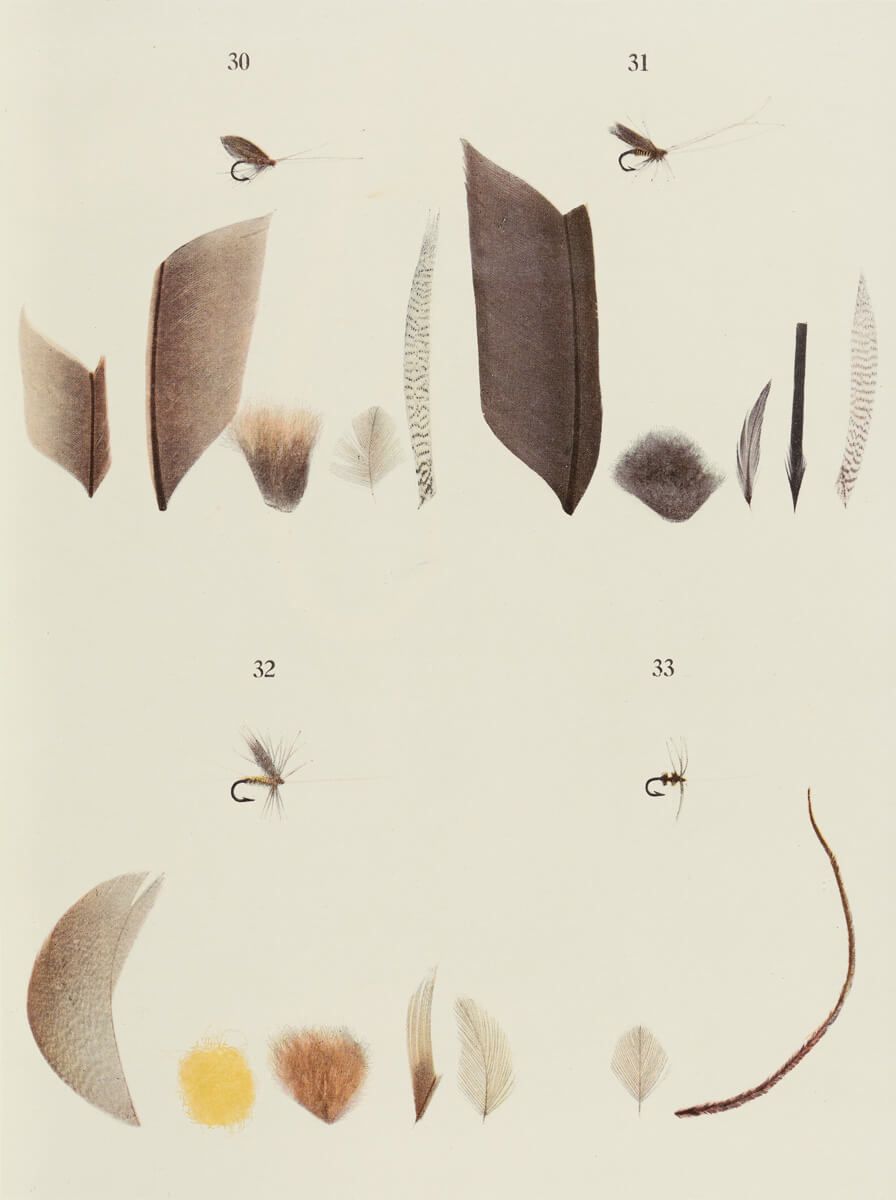 So that is who Edmonds and Lee were, what about their book? Although Brook and River Trouting ranks high in the North Country fly dressing bibliography, it has much more in common with the writing on the chalk streams than it does with earlier works like Jackson, or Pritt. This isn’t because Brook and River Trouting contains half a chapter on dry fly fishing; it is because the book is written in a completely different style to every North Country work that went before it. There is a reason for that. 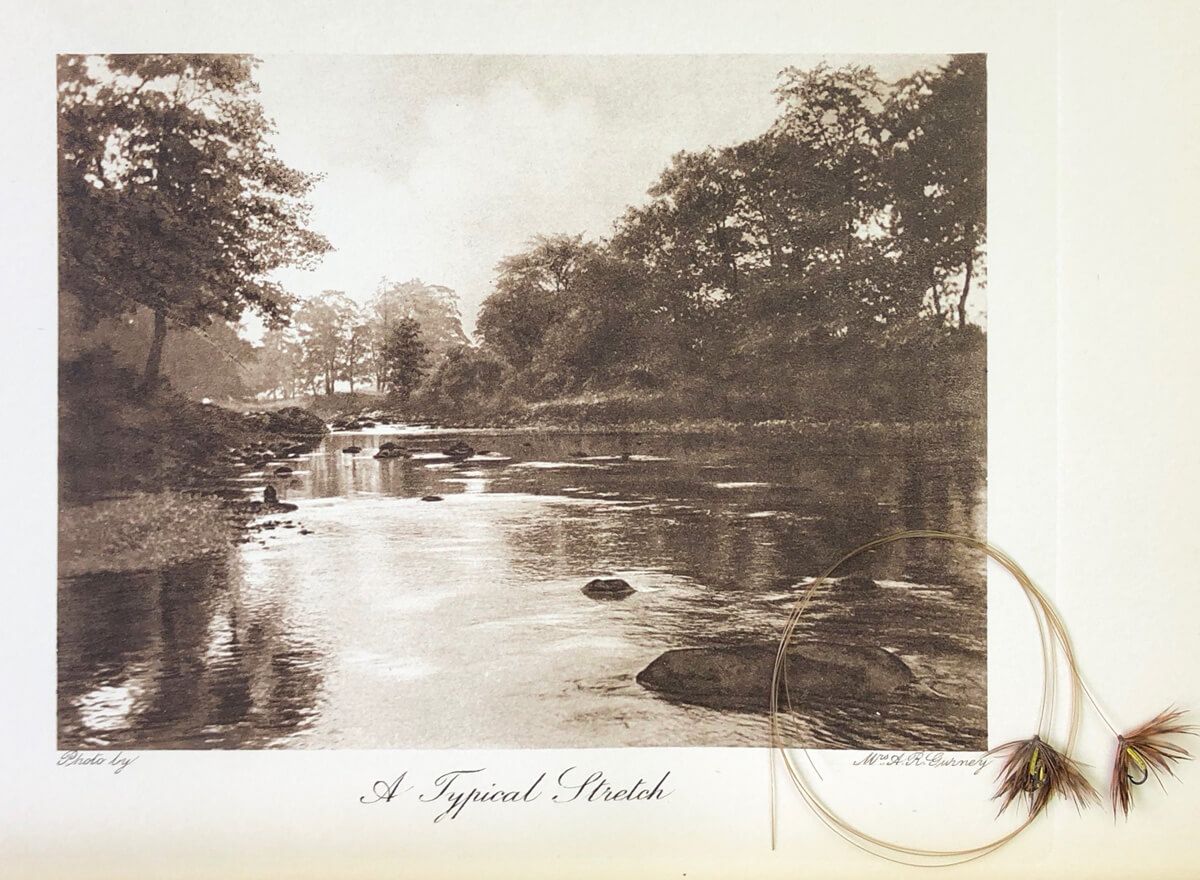 When the text was finished, Lee asked George Edward MacKenzie Skues’ advice about the tying of the flies for the limited editions and this had some unexpected repercussions. Even then, Skues already had a formidable reputation as a fly dresser, though he didn’t regard himself as an expert on North Country fly patterns. What Lee hadn’t bargained on was that although Skues had no problems with the standard of their tying, he judged their writing to be appallingly illiterate. Yeah, I know. It sounds like heresy, but Skues always said exactly what was in his head. In the face of Skues’ insistence, Edmonds and Lee rolled over and revised the text, twice, under his eagle eye. 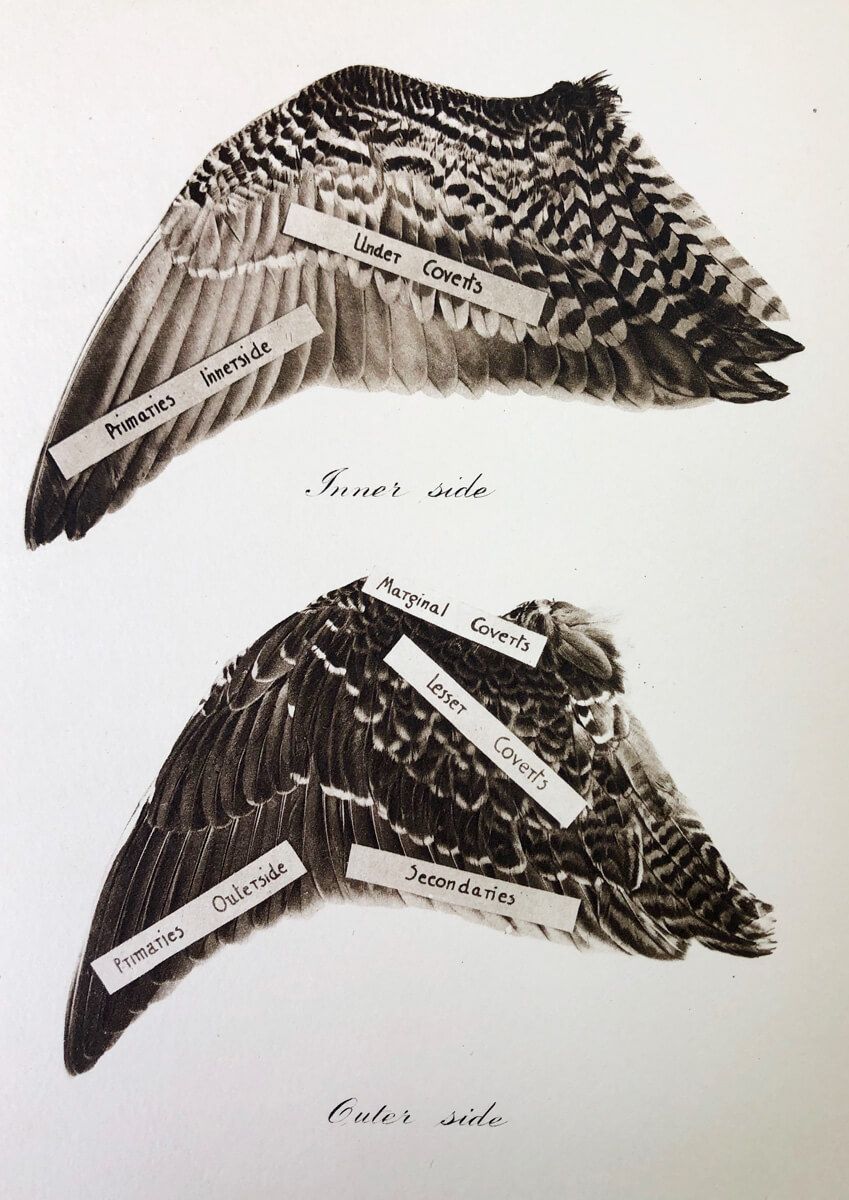 Skues’ intervention may also account for why, in what appears to have been a conscious imitation of Leonard West's and Frederic Michael Halford's works, Edmonds and Lee provided a colour chart for silks, detailed line drawings of naturals, and colour images of flies. This chart was based a Pearsall’s sample card that was current at the time, and if you compare the image of the shades of silk plate in Brook and River Trouting with the Pearsall card, the only missing colour was Pearsall’s No. 19, quite why, we have no idea. Whether they were encouraged by Skues or not, Edmonds and Lee readers of Brook and River Trouting were presented with colour images of the materials required beneath each fly, which makes the book seem modern, despite its age. 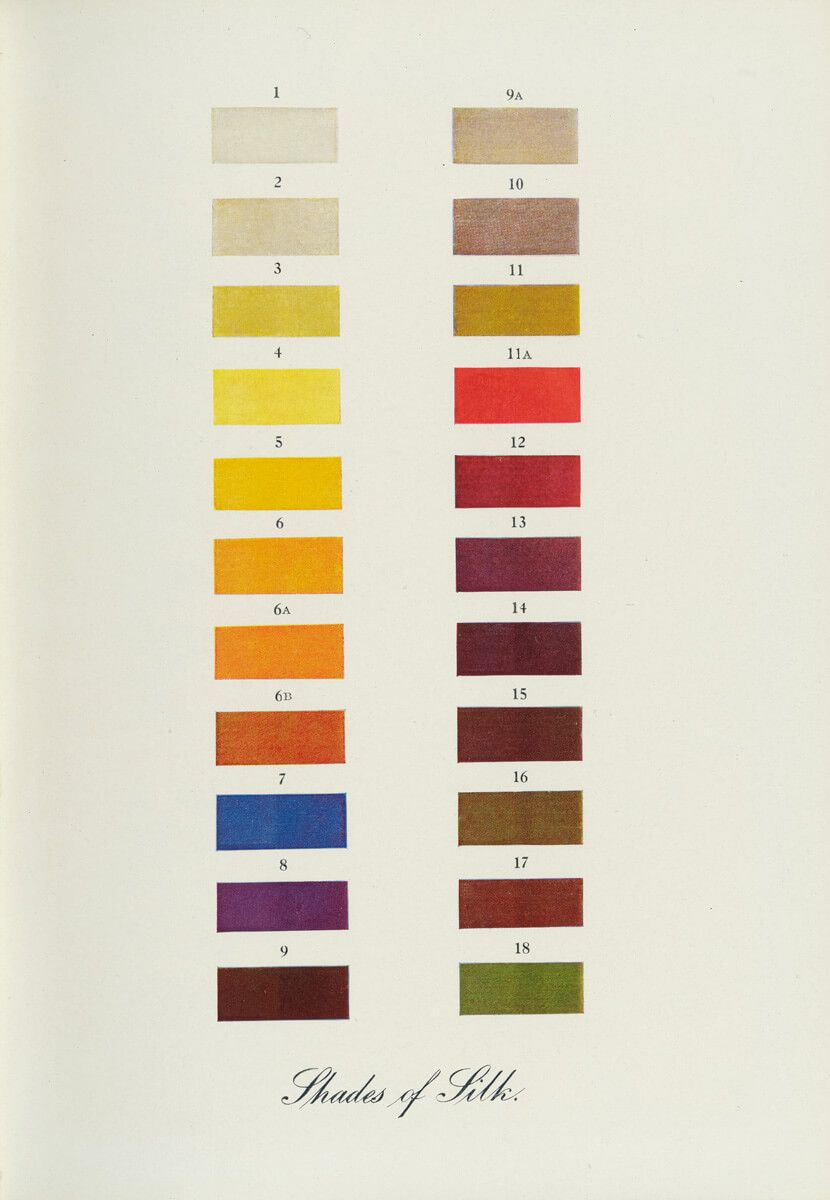 The end result is so memorable, that I doubt that anyone opens Brook and River Trouting without being impressed. Despite having been published over 100 years ago, the book blew the competition out of the water, and nothing quite like it has been published since. However, one thing that every reader will notice is that the fly dressing instructions in the book are a level of magnitude more specific about how each pattern should be tied than any preceding North Country work, but whether this is down to Skues’ intervention, or Edmonds and Lee’s choice is impossible to tell. Whatever the case may be, the pair take descriptions of hackles onto a different plane, discussing them like they were fine wine, for instance, a "dark smoky blue feather from a jackdaw’s throat", or a "light-tipped fawnish feather from the marginal coverts or lesser coverts of a dotterel wing". My all-time favourite is, "a light blue feather from the under coverts of a young grouse wing, taken before the bird is strong on the wing… This feather darkens very rapidly on the live bird from August onwards". 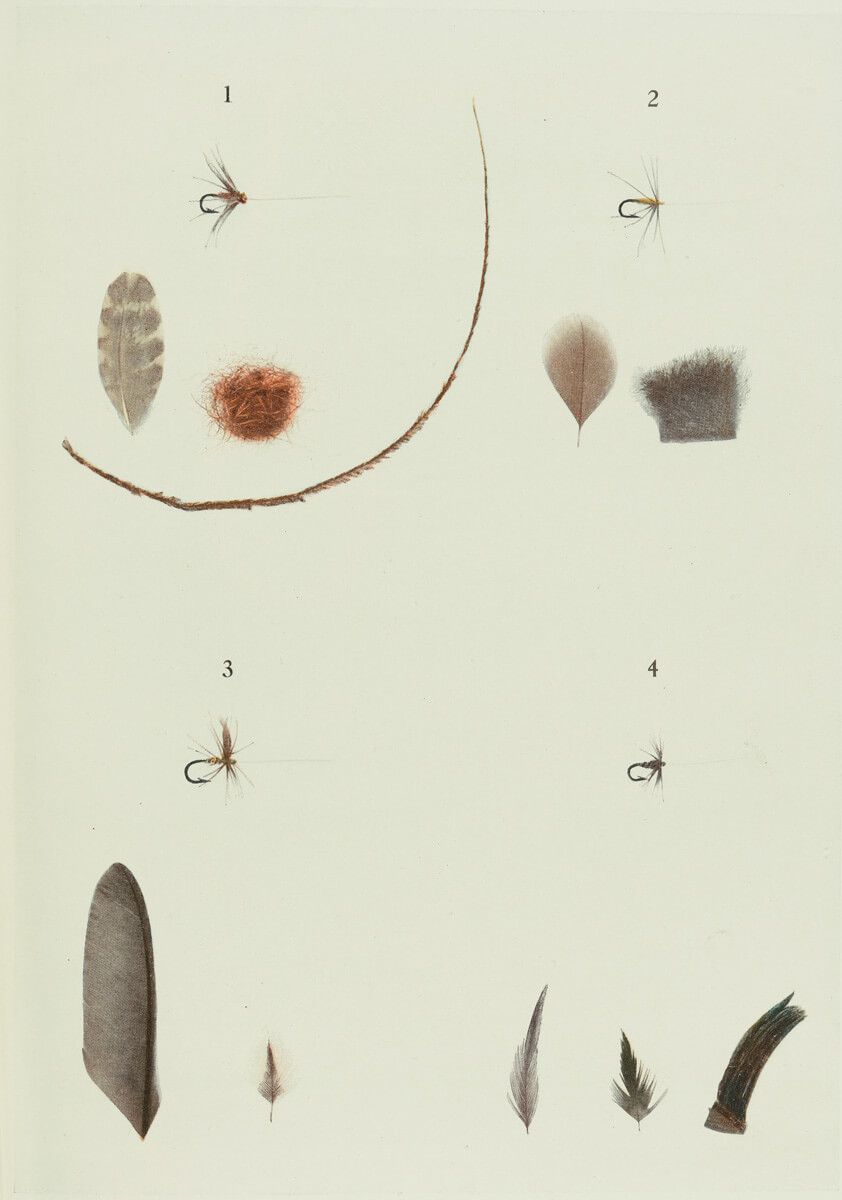 Yep, the authors of Brook and River Trouting were the original hackle junkies. Where Walbran wrote, "hackled with small feather from the inside of a waterhen’s wing", Edmonds and Lee have, "hackled with a smoky grey feather from under coverts of a Waterhen’s wing. (The darker side of the feather towards the head of the fly)". The most extreme case is the contrast between Lakeland’s 1858 dressing for the Snipe and Purple, which was expressed in the five short words, "Dark snipe and purple silk", and the dressing in Brook and River Trouting. Edmonds and Lee wrote thirteen words about where to find the feather, "Hackled with the dark feather from the marginal coverts of a Snipe’s wing". The word count of the entire Edmonds and Lee dressing is nearly seven times as long as Lakeland’s, and it gives an idea of just how different their approach to this old subject had become. Now you might argue that the pair might have been doing no more than to write down what the old anglers were telling them, but it would be a struggle to prove it, yet whatever the explanation, the end result is that we are much fussier about choosing hackles for North Country patterns today. 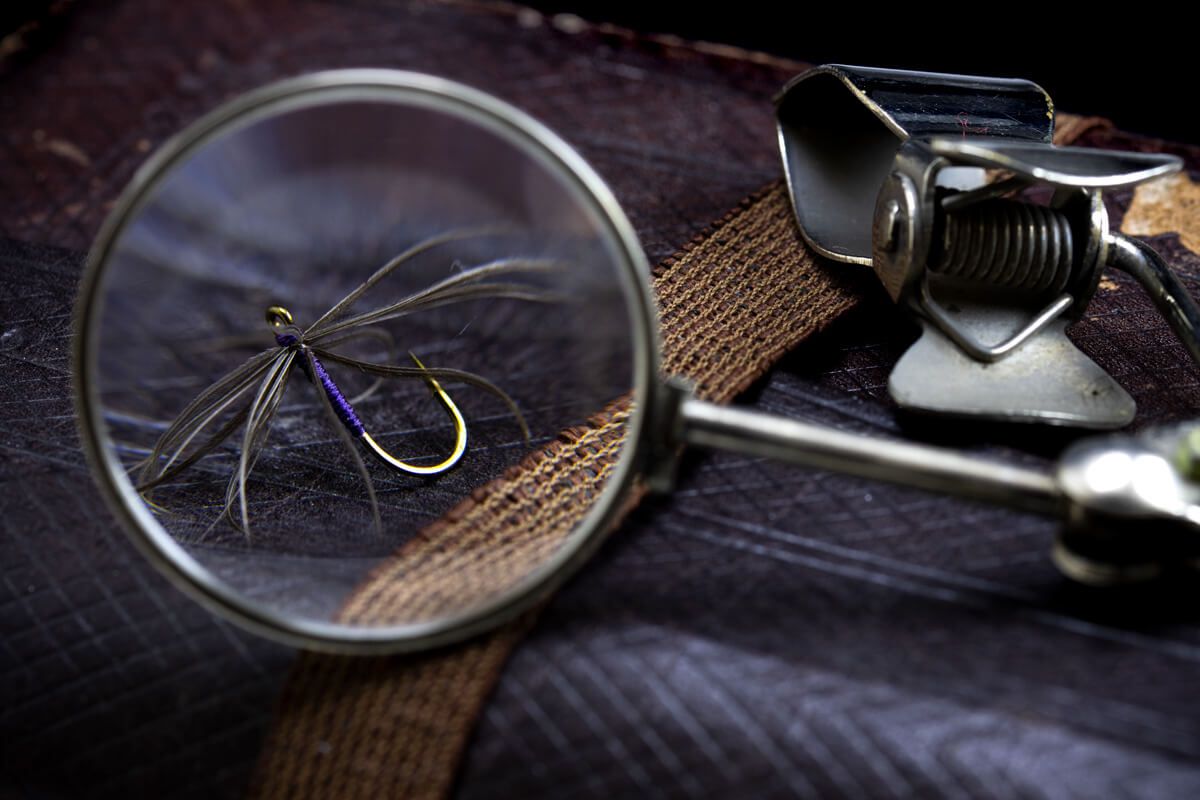 Another legacy of Brook and River Trouting is the modern day silk neurosis. On a historical basis, the only honest answer to the question of what silk to use for North Country flies is, “whatever you like”, because specialised silk for tying flies didn’t exist before the last quarter of the XIX century. Until then, fly dressers went to the haberdashers and took whatever silk they were given, but Edmonds’ concern about precise colour led him and Lee to suggest that a more satisfactory approach was to use a range that Pearsall had begun dyeing and manufacturing in the year of Lee’s birth. This was the first silk that had been specifically aimed at fly tyers, and it was fine and strong. To add to its attraction, Pearsall’s silk came in a wide range of shades, but its chief virtue was that nothing of the sort had been available before it went on sale in 1881. Which is a roundabout way of saying that if you tie any pattern mentioned before Pritt’s first book, using Pearsall’s would be wrong, because it didn’t exist. In real life, trout are forgiving about precise shades of silk, which is just as well, because if they saw flies the way we do, they would spot the hook every time, and it would be game over. 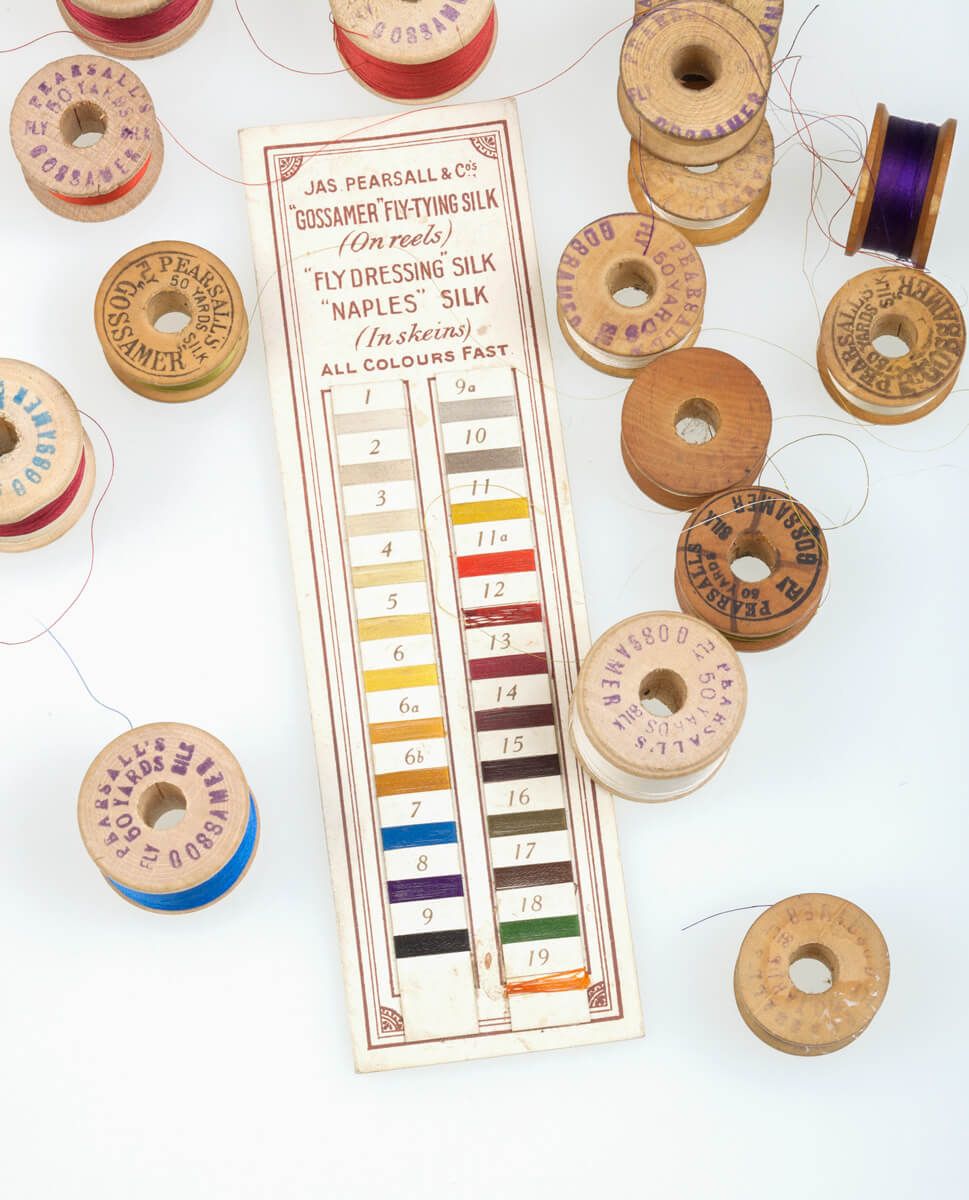 On the then very important subject of wax, Edmonds and Lee directed their readers to The Trout Fly Dresser's Cabinet Of Devices or How To Tie Flies for Trout and Grayling Fishing by Harry G. McClelland. To save you hunting around, on page 53, the author gave a recipe for transparent wax, which meant boiling down “some of the purest white or amber resin with about the same amount of turpentine”. "Resin" means rosin, which was added to make the wax sticky, and the old timers generally added beeswax, but the kicker is that modern waxes are made a completely different way and so give different results when applied to silk. Just to give an example, old waxes turned pale yellow silks noticeably olive, whereas most modern ones usually don’t, often because they have been designed not to do it. Edmonds and Lee would very possibly have written even more had they been able to see into the future, because they thought that fine shades were very important, but despite the fact that the bodies of their Partridge & Yellow had a green tint and ours do not, the fly still works. It might be that we are more critical than trout. 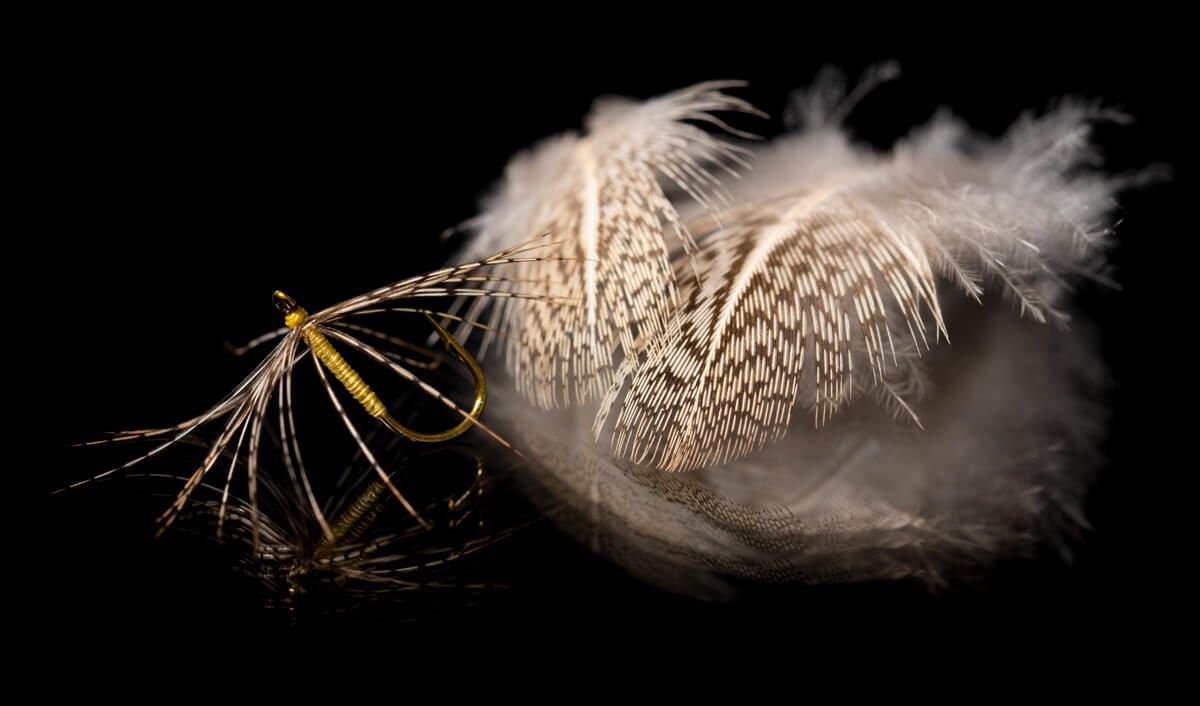 So, understanding where Edmonds and Lee were coming from helps to understand why they wrote their book the way they did. Today, we can’t duplicate their flies exactly, because our silks are dyed with completely different chemicals, some of the feathers they used aren’t around any more (Dotterel, anyone?), and the tints they favoured, like Crawshaw’s Red Spinner dye, are long gone. But it doesn’t matter. Were Edmonds and Lee with us today, they would get on and find other, different, even better solutions. Which is where all the fun of fly tying is to be found.

Cortland on the hunt: the home team

Cortland Line Company has been on the scene in various forms for over 100 years. Founded by a businessman and avid angler named Ray Smith in 1915.