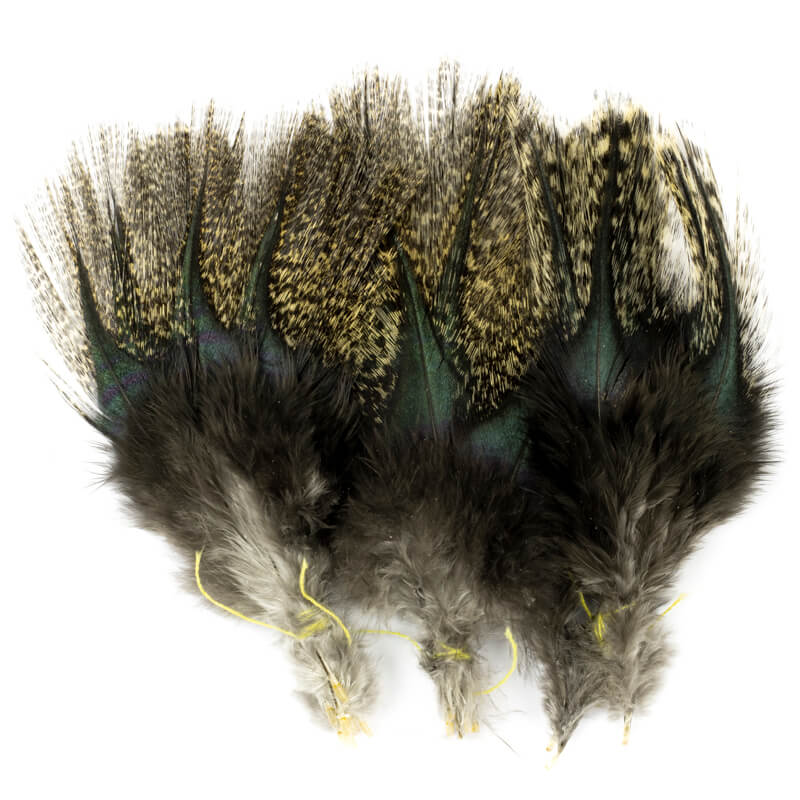 Nowadays, the feather of Coq de Leòn is known and in demand all over the world. The Pardos and the Indios give off a kind of perfume, a fragrance that captivates any fisher who looks at them. But we must remmeber that the quality of these unique feathers depends on the selective breeding, and not just anywhere, but rather only in its original habitat. For this reason, the production is very small and their value very high. Fortunately for the breeders of Leòn, each year Gallo de Leòn are more widely known.

All the cockerels of the World, and so we can safely say that all Coq de Leòn, come originally from India, especially from Gallus Bankiva or Red Jungle Fowl, a wild species which lives at altitudes up to 1000 m. The wonderful Coq de Leòn has two varieties of feathers that are useful to fly tiers: Pardo and Indio. Those from Pardo have their characteristic pencas (spot, blotches) and those from Indio are brilliant as metal.

The cocks from Leòn have different characteristics that define the pure breeds. Only Indio cocks have a certain resemblance with the Andalusian breed of chicken. These birds date from Roman timnes, and were widely kept due to the quality of the hens as egg producers. Our Coq de Leòn varieties are the result of an unknown number of cross breedings in the attempt to improve quality of the animal feathers. The aim was always to use the feathers to fish. Of the two varieties, the Pardo cock has suffered more crosses, moving its features away from its pure parental breeds. In both types of bird communities, where the dominant cocks rule the roost but are occasionally attacked and defeated by cocks of less rank.

Gallo Pardo de Leòn. They are very fruff cocks, tougher and stronger than the Indio variety, and of an elegant and graceful bearing. Their genetic constitution belongs to the Atlantic strain of domestic fowl. They are basically different from Indio in the colour of their plumage; dark with bluish-greenish highlights in some feathers. In these feathers the typical mottling pencas stands out and that's why this variety is known as Pardo. The shape and intensity of the pencas is defined with the categories of: Corzuno (small), Pardo (medium), Aconchado (large), Langareto (large with specific drawings).

Gallo Indio de Leòn. They are strong animals with a crotchety temperament. They trace their pedigree to the Mediterranean line of birds. In some cases there is a noticeable influence of the Andalusian and Black Castilian breeds. The colour of these birds plumage is usually brilliant ash gray, with individuals more or less dark and with some parts of the plumage with ochre tones. An important feature is that the colour of the plumage is usually pale grey or even white, a fact that we must take into account when we define a feather as Indio, because there are some varieties of Pardo without pencas that can be confused, but they have dark plumage.