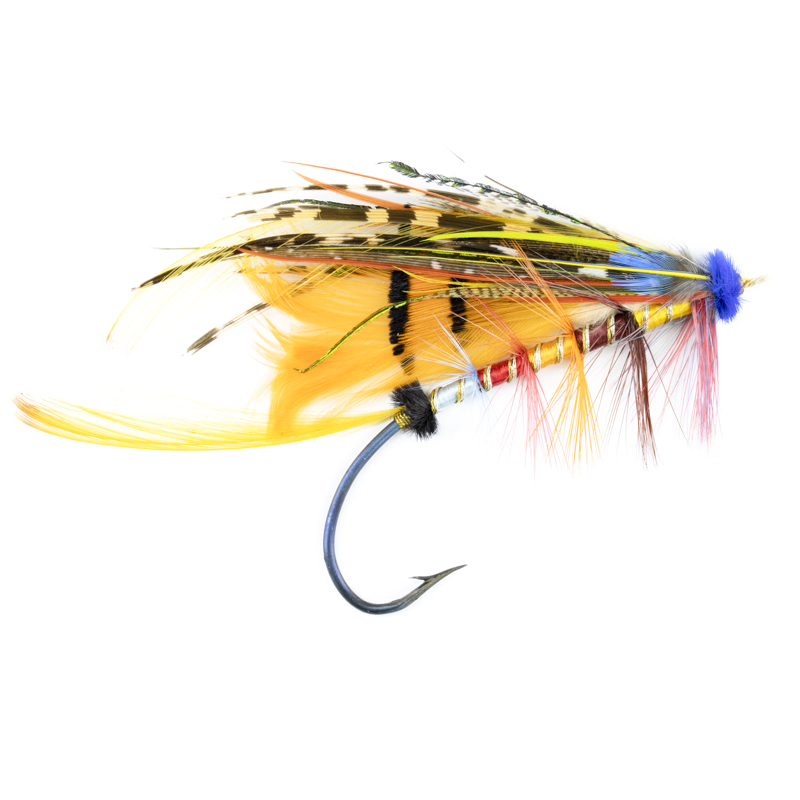 These 12 original Blacker’s Salmon Flies for the Shannon patterns were the most sophisticated salmon flies ever described on paper back in 1843, the year William Blacker published his famous Art of Fly Making. An amazing set of flies all dressed by Alberto Calzolari still using the antique method of tying in the hand without the use of vise and bobbin and using only pure silk tying threads and Alberto’s own recipe of cobbler wax and varnish. Each fly is tied with original and antique materials, with pure silk floss and carefully dyed genuine pig’s wool for the bodies, antique tinsels and selected genuine feathers. Flies are dressed on hand made blued hooks with real twisted gut strands and are displayed in a protective plastic box with a reproduction of Blacker’s business card and accompanied with a certificate of authenticity. These are the closest possible reproductions of the authentic flies.
William Blacker was a genius of his times and probably the most talented fly tier ever lived but he ended as a ghost of the past until the publishing of The Blacker Trilogy. Alberto has tied well over 500 Blacker flies in hand for the first three volumes, for the De Luxe editions and for the 4th volume to be released in the future, and his knowledge on the materials and craft of Blacker’s flies has reached the highest level. Both the owner of the Trilogy and salmon fly enthusiast have now the chance to add one of these flies to their collection.
Alberto Calzolari is an internationally known fly tier, lecturer and columnist with a special passion for historical research on classic flies and fly tying materials. Many of his flies are in museums or private collections and many others are represented on magazines and books, among them The History of Fly Fishing by Andrew Herd, Fly Tiers of the World by Steve Thornton and Classic Salmon Fly Patterns by M. Radencich. He is one of the team members who worked on the The Blacker Trilogy, on the book trilogy on the life, books and flies of the iconic mid 19th Century Irish fly tier William Blacker, together with Andrew Herd, Hermann Dietrich-Troeltsch and the editor Jon Ward-Allen.

The flies will be tied upon your order. Please allow between 2 to 3 weeks for the fly to be shipped. Feel free to contact us for any enquiry or clarification.
Dressing for the Shannon #12 as described by Blacker on 1843 Art of Fly Making.

Body: Four joints, a tag of black ostrich, or various shades, and at each a small hackle, (begun from the tail) with blue or yellow silk, then red, orange, puce, or purple, morone (archaic word meaning maroon), and at the shoulder, gold colour, ribbed with gold and silver twist, or tinsel successively. Legs: A large scarlet and blue hackle, rolled on together at the shoulder, after the jointed body is formed; (you may place on various gaudy feathers, hackles, &c. at this place; when you form the joints, make the body very thin.) Wings: Two golden pheasant neck feathers, cock of the rock, or four toppings, sprigged each side with the following: scarlet macaw tail, the blue peacock sword and wing feathers, argus the two shades, green parrot tail, red ibis, bustard, mallard, dyed yellow, teal, and guinea hen, with king-fisher, and a very long topping, fair in the centre. head - black, scarlet, green, or blue ostrich. Tail: Two golden pheasant crest feathers, long. Hook: No. 5 to 8, Limerick.