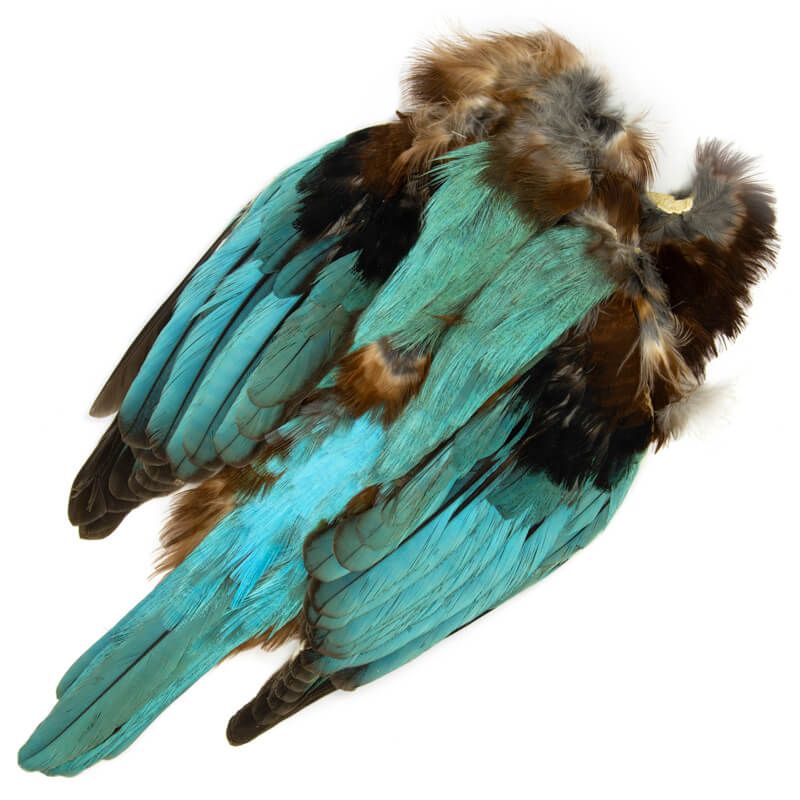 Traditionally, feathers from the Asian Kingfisher have been used in both salmon and trout flies. As an example Theakston used the kingfisher blue feather as the hackle of his Heron Spinner. In salmon flies, kingfisher body and rump feathers are used much more frequently. While the use of kingfisher feathers predated the use of Blue Chatterer in fly tying literature, Pryce-Tannatt claims that kingfisher feathers are substitutes for Blue Chatterer Cotinga.
Indian Kingfisher Full Skin can be used in the Chatterer body, Black Ranger and Britannia cheeks, Blue Baron and Kendle tails. Occasionally, blue kingfisher feathers will be used as veiling in flies, such as the Blue Boyne, or as throats in flies such as Bo Peep. Dressing for the White Doctor and Blue Rover specifically call for kingfisher feathers, not blue chatterer, for the side and cheeks. Other representative examples could be the Jock Scott, the Butcher, the Bushmill's Warrior. Indian Kingfishers is one of the basic fly tying material to create many of the William Blacker salmon flies as the Shannon Serie and many of the flies described in the 1842 and 1855 editions of the Art of Fly Making.