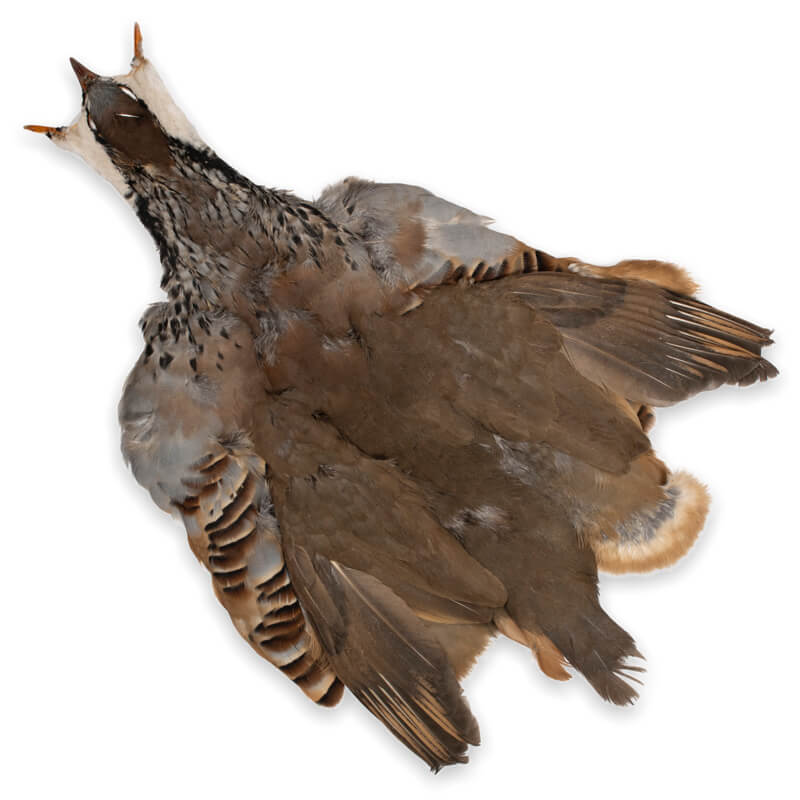 The Red-legged Partrdige, more commonly known in the fly tying world as French Partrdige, has been historically distributed in the middle and southern France, lower valleys of Switzerland and northern Italy, subsequently introduced in other areas of Europe. Both sexes are alike in coloration. This bird seems to be mentioned in just few of the dressing quoted in major fly tying books. But, many of the feathers features a very nice looking dark brown olive.

French Partridge Full Skin feathers can be widely used to tie modern or classic wet flies, sometimes can be useful even to dress classic salmon flies. The French Ranger, is an example of a fly that uses red-legged partridge feathers. This pattern is tied exactly like the Black Ranger, except that the wing consists of one pair Jungle Cock, back to back, partially veiled by two pairs of red-legged partridge flank feathers, back to back and partially ever-lapping.

One French Partridge hackle, treated with Semperfli Picric Acid Dye, is necessary to realise the legendary May Fly Emerger that Massimo Masi did use in the river Unica. A deadly fly when expertly fished with extremely long leaders and ultra light tippets. To get on the trail of this historical fly, you could need other fine feathers as Coq de Leòn Pardo, CDC Super Select, and Root River Cape Blue Dunn, as a quality substitute of the now scarse Coq de Limousin Saddle.